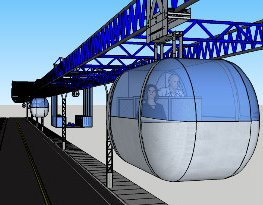 enefits         How is this new way better than private automobiles ?

BENEFITS TO THE TRANSIT AGENCY

CityTram utilizes the space above a portion of existing roadways and sidewalks.  So there are no additional right-of-way costs.  CityTram has been designed from day one with a maniacal focus on low cost.  Construction costs for 1 mile of CityTram are comparable to construction costs for 1 mile of residential street.  This is an order of magnitude lower than light rail or other ATN systems, and multiple orders lower than subways.

CityTram is designed for cheap operation.  Its design is simple and borrows existing technology and components from other applications.  So it relies upon few parts, for which suppliers and predictable performance and costs already exist.

CityTram cars are simple passive vehicles with no drive motor.  They have only user interface electronics and a small HVAC system, with battery.  Rolling stock is roller coaster technology, so it is proven, available, and cheap.  Fixed small electric motors are used to drive lightweight sprocket and chain mechanisms such as those used in motorcycles for years.   Since it is a constant motion system, acceleration and deceleration forces which lead to wear and tear are minimal.

So the bottom line is that because it is so cheap, CityTram is a more cost effective way to grow a transit system.

CityTram does not rely upon complicated future technology, such as autonomously controlled cars.  It relies upon existing control technology already being used in factory automation and people mover systems.  It is realizable today, using existing technology and components.

BENEFITS TO THE COMMUTER

• Faster from point A to point B

Check your next several car trips - just measure point to point distance (miles) and total trip time (hours), then divide.  In an urban environment, car travel averages between 11 and 23 miles per hour.  CityTram moves at a constant 30 miles per hour, and since it runs above existing roads, its route is as efficient as that of cars.  So CityTram actually gets you there faster.  With taxi stands (stations) every 1/2 mile, access to CityTram is nearly as close as access to the closest parking lot.  So walk times (immediacy) are nearly the same as for a car.

The capital and operating costs the provider will have to pass through to the commuter will be lower than similar costs to operate a personal vehicle.  Since CityTram cars are simple passive vehicles, they will be cheaper than private automobiles, and should last longer.  Since they are re-used, fewer of them are needed to service the same number of commuters. They will also be cheaper to maintain. Since the system is safer than cars, busses, and trains, insurance liability will be lower on the fleet. Since cityTram is very energy efficient, energy costs will be lower.

CityTram vehicles are mechanically interlocked to prevent collisions.  They travel at a lower top speed than cars to lessen the impact if derailments were to occur.  They travel in their own exclusive guideways, protected from interaction with cars, bikes, or pedestrians.  All vehicle movement is controlled by computer automation, rather than by more fallible amateur human operators.  Vehicles are not allowed to leave the stations unless all passengers have seat belts properly engaged.

BENEFIT FOR THE PLANET AND MANKIND

Because CityTram is so incredibly energy efficient, the carbon footprint for a commuted mile is drastically reduced.  Personal automotive commuting just in the United States accounts for 6 percent of the world's energy consumption each year.  If 40% of those commuted miles were voluntarily converted to CityTram, world energy consumption could be reduced by 2 percent, and our children would have a better chance to survive.